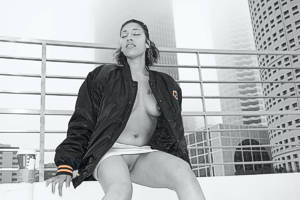 Surrounded by the city’s tallest building, the diminutive Lexy posed a stark contrast. Barely standing five feet tall and the mother of four children, she doesn’t really epitomize what many of us might characterize as an immediate candidate for such a project. But I’ve known Lexy for several years and she was an immediate “yes” in my mind as soon as she expressed interest.

A button-down shirt or jacket, was what I routinely described to would-be models as being the key wardrobe component that I asked them to bring and when she showed up in something more closely resembling a turtle neck I could have screamed. I had already been though a couple of wardrobe fails. That’s how my Wolves bomber jacket appears in this book. I knew it would finally come into some use!

"I don't think I ever got tits out downtown before."