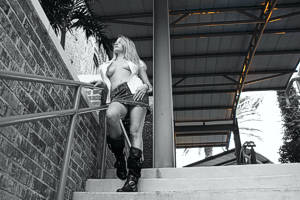 If rules are meant to be broken, my one girl one shoot rule was up for grabs when I had the chance to shoot Brittney again. I’ve broken the rule three times and any hot-blooded photographer worth their salt, would have taken up the second shoot option with her.

This time our location involved an old red brick building that is now part of the scientology complex in Ybor, so I think we got in there ahead of their security system and the associated cameras. Which is just as well, because while this could have been considered a religious experience for me, I’m not sure the entire congregation would have approved.