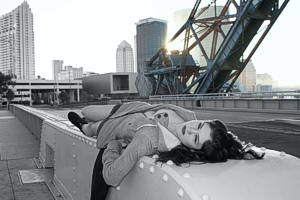 The records that you want to see during these types of shoots do not include record low temperatures, but that is what happened on the January morning that poor Carrie braved the bridge at Cass St in Tampa with no panties and no bra. Yes, she had a hoodie, which was a last minute wardrobe substitution due to the severe cold, but we had to break every few minutes to throw a blanket over her and stop her going in to hypo thermic shock.

The severe cold played havoc with my shutter finger and from my own performance wise, this was probably my worst shoot of the project. But what made me more uncomfortable was the ever-present husband that she had brought along who was clearly outside of his own comfort zone and shadowed my every movement to make sure I wasn’t seeing more than HE wanted me to see.

"I have seriously never been this cold before."

But those conditions aside, Carrie rose above the occasion and pulled off some perfect looks for the project, like this one lying prostrate on the metal rail of the bridge as early morning traffic crawled by in fascination.