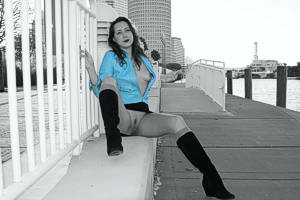 Kelly replied to my ad search for the project and while she had done some shoots before, she had never done anything beyond a lingerie level. Getting her comfortable in exposing herself in a public environment was a question mark for me. But I needn’t have worried.

This shoot took place on the edge of the Hillsborough River in downtown Tampa and as I am taking this shot and several similar by the water’s edge, a rowing team passed little more than fifty feet from where we were and all heads turned as she opened up for the shot. It wasn’t so much taking one for the team as giving one to them. I wanted to say something about the cox getting angry, but that would be inappropriate.

"It will give them something to talk about later."