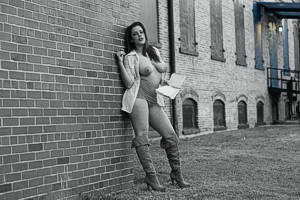 I had no idea what to expect from Katie, having never met her before nor really know anything about her, but by the end of this shoot, I had unearthed a real gem that I happily today call friend.
We were located on a busy street in Tampa with quite significant traffic rolling by and so the conditions for ripe for an awkward, furtive, and even embarrassing shoot. But she didn’t give a damn who saw what, as she threw together winning pose after winning pose that bared all and then some.

But more than her exhibitionism, her self-awareness and professionalism made it clear that I was working with a model who was at the very top of her game. When I ran out of suggested poses, she got into her “what about this?” mode and became a true inspiration for this shoot. And several others that followed.