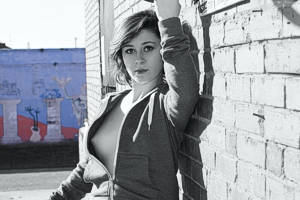 By the time I was shooting Tiffany for this book, it was the last scheduled shoot of the project and all the “safe” locations were gone. So we were shooting at an old cigar factory building that fronted a major thoroughfare in Tampa. Traffic was coming in bursts, with a traffic light two blocks down from us releasing six to ten cars at a time. But our visibility of the cars (before they saw us) wasn’t more than a second or two.

For someone who had never shot before and who was the youngest model in the project, she had amazing composure and confidence. She pulled off several winning shots within a thirty to forty-minute period despite half the time she had to check over my shoulder for oncoming traffic.

"We all have a little wild side."