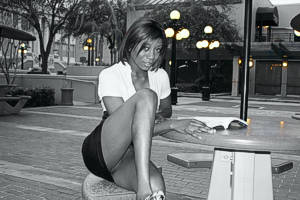 Slim, long-legged and pretty, Tamara looked every inch at home when we shot at the HCC campus in Ybor. We had to dodge students in between shots, as they milled perilously close to where we were shooting but we still managed to discretely pull off shots that were more than slightly saucy.

Never got to know Tamara beyond the shoot … she became simply a name, face, and body for the project, which is a shame really because she had no problem setting into her role and seemed full of promise for other projects. But then she was gone, fading like a fog into the bright sunshine.

"I didn't know they had classes on a Saturday."