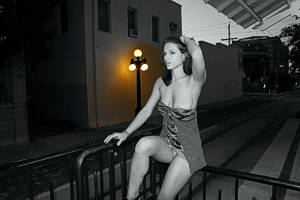 On two occasions during this project, I had to abandon the shoot and this was one of them. Laci and I had descended upon a street-car platform in Ybor just at sunrise. I had never even met the girl before the shoot (which always adds a level of discomfort to a semi-naked shoot) but what made matters worse we had an unwanted “admirer” who would not take a hint and leave us alone. Some guy with a bicycle decided to stop and take in the show and resisted my repeated attempts to get him to move. And this is not the kind of shoot that you want to make a scene at, so after 20 minutes we had to call it a day.

It’s a shame really, because Laci had a good look and an excellent body and this shoot could have developed into something special. The surroundings of the street-car platform and the backdrop of Ybor Square made the location a winner. I’ve never heard from Kristine again and seriously thought about not including any of these shots from the book, but then I thought how could I waste such a perfect circle of exposed areola … it would be an injustice, regardless of the circumstance.

"I'm going to shove that bike up his ass."