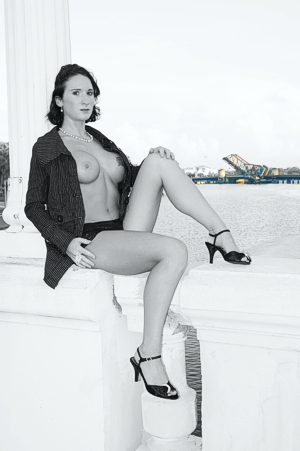 Fake boobs. You either like them or hate them. But it was definitely one of the most noticeable things about Steely. I had never met her before and never have since, but she was fun and daring and didn’t mind taking them out in traffic. We shot on the bridge of the Hillsborough River on Kennedy and even at that time in the morning, there was a general buzz of vehicles cruising past.

This particular pose was perched on the walls along the Kennedy Blvd bridge as it crosses the Hillsborough River. Each green light on the intersection with Ashley Drive brought a flurry of cars and some appreciative horn-blows from the occasional male driver. She held pose, undaunted!

"I thought he was pulling in for a closer look."