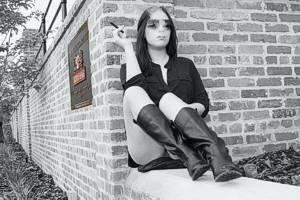 I’ve known Chloe for years now and even though she doesn’t normally model, I was thrilled that she agreed to subject herself to my lens for an hour. One of my favorite people in the world, she flew in from NY to be part of this project. Not surprisingly, she commanded the shoot, requiring little direction and challenging my lens to find that right angle.

We found our location outside an old cigar factory south of Ybor and with little more than a cigar and a smile, she pulled off one of the strongest shoots of the project. While there was ample nudity throughout the shoot (to the delight of traffic that was passing by), I opted for this particular shot because of how discrete and inconspicuous the nudity was. Eyes on the cigar, boys!

"I haven't had a cuban in my mouth for years."