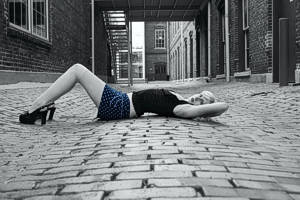 This shoot fully accounts for all my involvement with Alicia. I had never seen her before, nor since. The location I chose was a red brick undulating alleyway between two buildings in Ybor City and it has since been closed to public access. So this moment where I convince a young woman that I’ve never met before to lie on the ground that no-one can access anymore and then expose a breast for the lens, has got to fall in to the “pretty unique moment” category.

Alicia had also never modeled before and no one had ever taken a semi-nude picture of her before (she told me), so all told I felt pretty privileged to get this particular shot. I love how the arch in her back mimics the worn surface of the ground and how she is involved in the overall depth of the picture as the alley recedes behind her. Technically, this is one of my favorite shots of the project.

"Can you really see it from down there?"