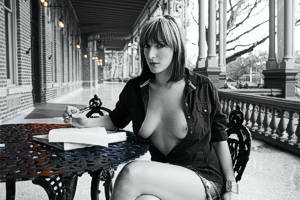 Another subject that I had never met before, nor since. Joanne was a natural answer to my search for a student-like model to shoot at the University of Tampa. At the time, she was both a student AND a model.

We set up on the front porch of the Plant Hall building and even though crowds were beginning to assemble (it’s a popular photo-location) by careful position we were able to get several “boobs out” shots before the crowds were too invasive.

"This is my first time going topless on camera. Do they look ok?"

I particularly like this shot because the architectural style of the building isn’t entirely lost in the glow of her nudity.